Harry Rocks to The Needles 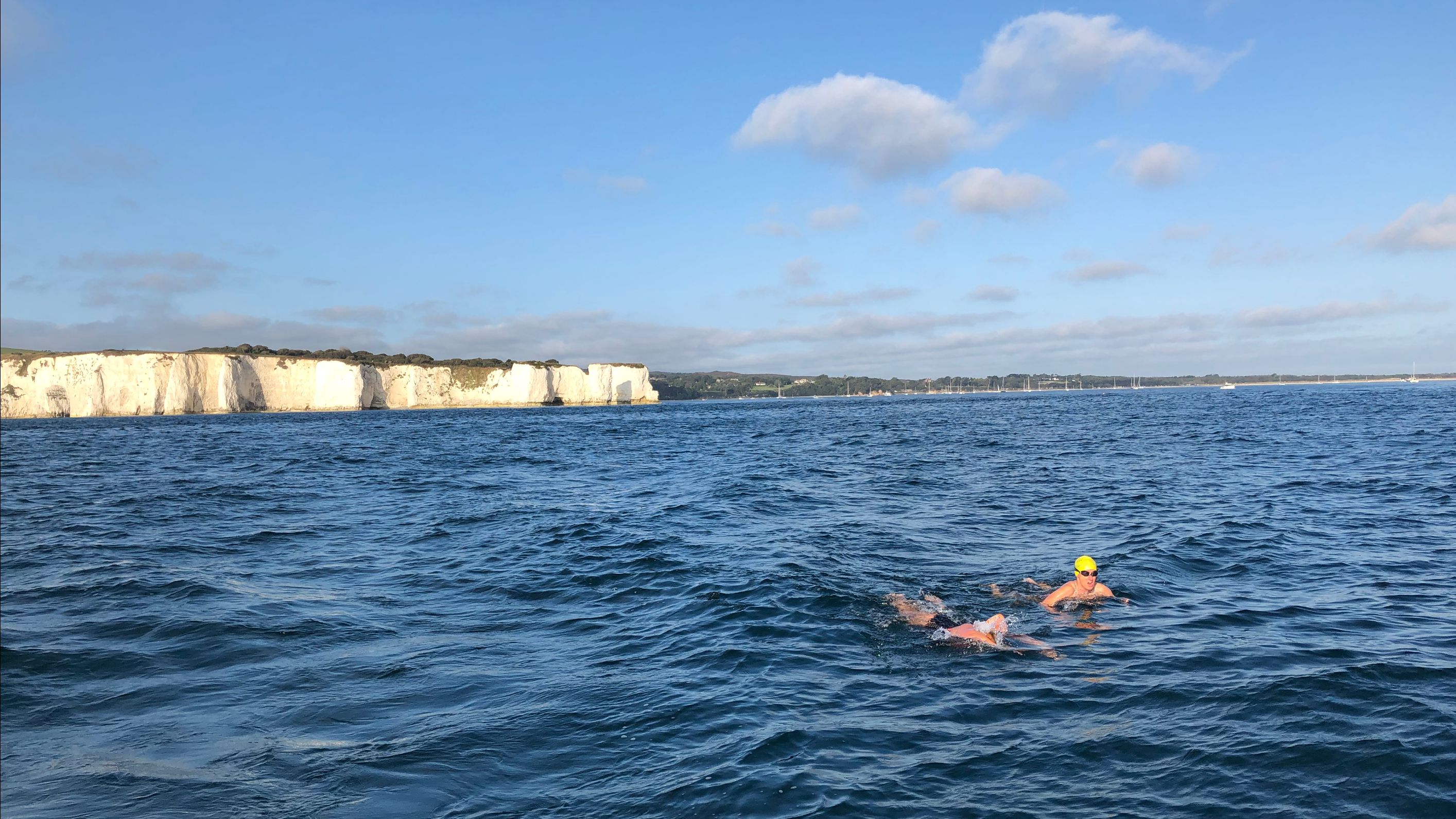 Harry Rocks to The Needles : One tick for the bucket list 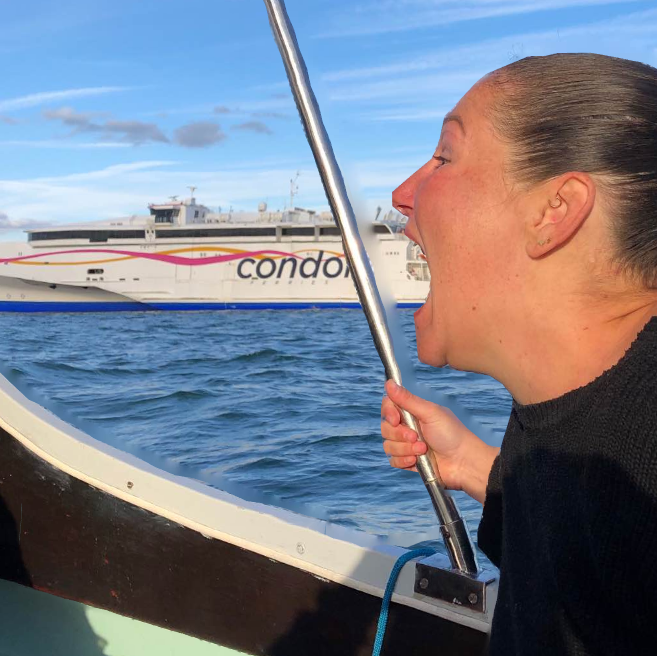 Last spring, having spent a good while on my local beach, looking out to sea and wondering if it were possible, I decided I wanted to try swimming from Old Harry Rocks to The Needles. I didn’t have a clue if it was do-able, but made some enquiries and booked a date with the Boney M, a local fishing boat who’s pilot Louis also sidelines in channel training/boat practice.

Shortly after booking the date two of my swim friends (Ali and Ann) successfully completed a relay swim of this stretch. It was an absolutely epic swim and made me realise that it was going to be potentially do-able. I trained, but as the date got closer it became clear that the tides were unlikely to allow for it on this date and, with no other availability, it was postponed until this year (insert unhappy grumbles)!

I definitely work best when I have a goal, but having said that, when the goal seems too far away I either kid myself that I’ve got ages and do no training or I fixate and don’t rest at all until it’s done. Obviously in the case of training for a channel crossing the first option is not to be advised, so getting some interim challenges booked seemed to be a good idea, but  also risked me burning myself out before I’d even begun? I was in quite a risky pickle!

I’ve spent the last few years trying to keep on top of a shoulder injury that, without a lot of TLC, rears it’s ugly head. Having semi-learnt from my overtraining mistakes of the past, and with a longstanding hatred for pool swimming, I kidded myself that I could do without winter pool training if I trained hard enough outdoors (yes, I really am that stupid). What was going to keep me training hard outdoors over the winter? An ice mile of course!! So....at the now evident detriment of my fitness (what little there was), I got busy getting cold and getting slow!

The Ice mile sadly didn’t happen on account of our mild winter, but I did do a mile in 5.1 degrees (what’s 0.1 degrees between friends anyway) and although I came out of the winter slow, I did come out hella acclimatised. I was able to swim 1 hour + all winter and so when spring hit I was ready to crank up the distance nice and early......cue covid and a ban on travelling to exercise (insert more unhappy grumbles)! 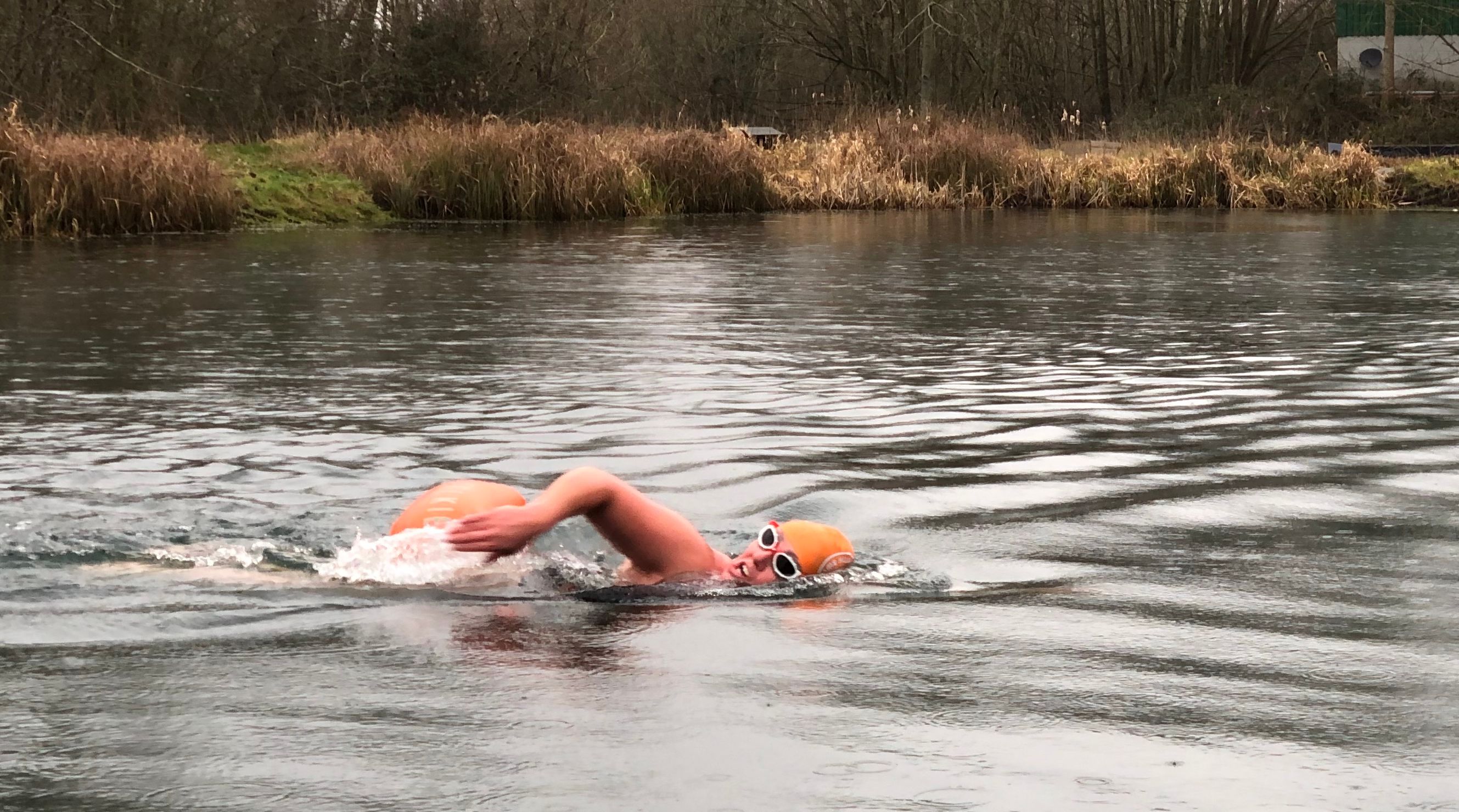 Three months later with all the benefits of my winter training and the last of my swim fitness diminished I got back in the now fully warmed water and got to it! Go time!

My interim challenge (Old Harry to The Needles) was now only 3 months away! The urge to go to town cranking up the mileage was strong, but thankfully I was kept under strict instructions from my good swim friends and coach to build gradually and my training partner, Sarah, ensured I did as I was told!

Lots of 2, 3, 4, 5, 6 hour swims later and the day finally arrived for the swim....so too did a top notch weather forecast! Having spent all spring/summer training together, and swimming well together, I asked Sarah along for the ride/the lols.

It’s a stretch of water that’s never been swum solo before and I wanted to share it with her. We were pretty sure it would be rained off, or we would end up nursing injuries so were in disbelief to make it to the start line!  So in we jumped!!! 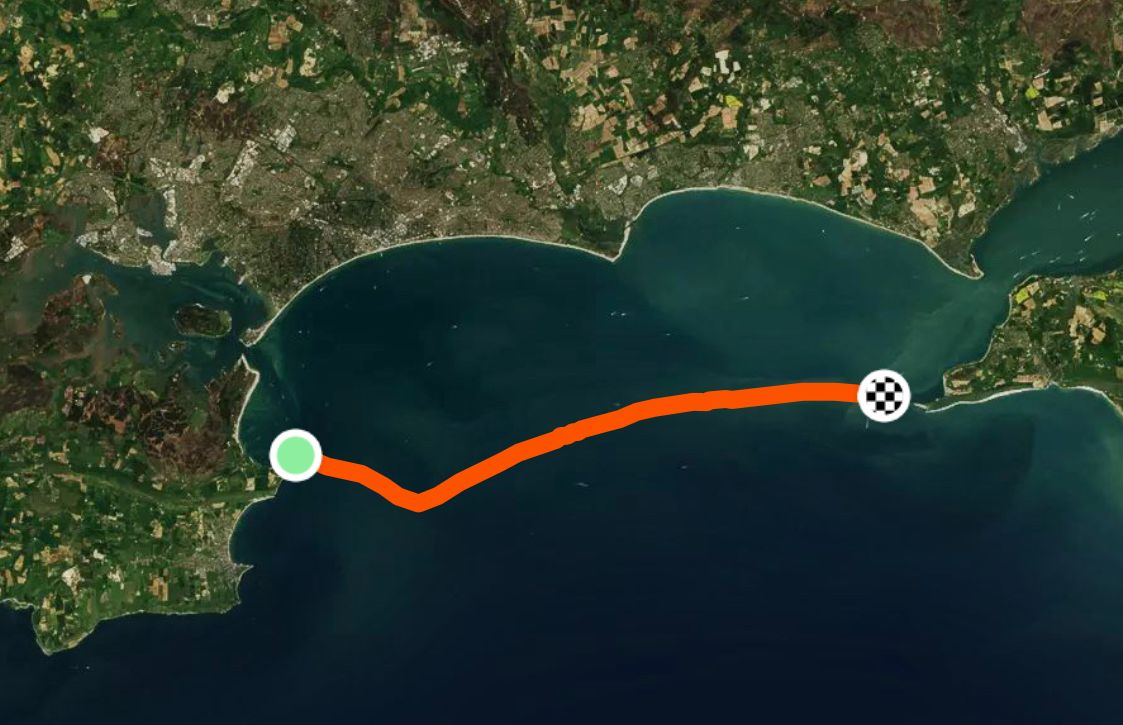 As we learnt the hard way on previous training swims, the tides around Old Harry are “odd”. Today was unfortunately not too different and it took us a long while to break away from the rocks and start making progress. There was a cruise ship mored not all that far from the start which we predicted we would make it to in 2 hours or so, but I think 7093 hours passed before we finally made it alongside. The ship was probably circa a quarter of the way along our route, but I think we spent about three quarters of our total swim time making it to that point. As soon as we got level with it the tide slackened and began to turn....about bloody time! 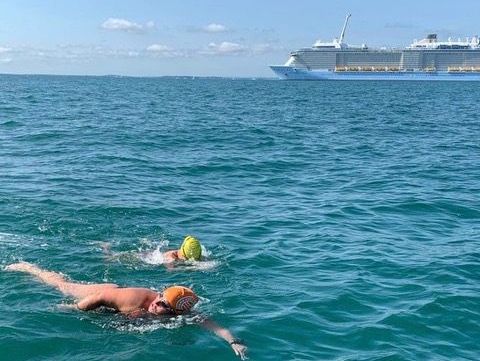 Now this is where I got a case of “twitchy neck”.....my friend/coach/world champion swimmer extraordinare has spent all summer getting me to quit sighting and keeping my head down (on account of the shoulder injury mentioned earlier). Trouble is, when you are swimming somewhere specific and the big ass marker point you were using previously is now behind you (the cruise ship), and you spot on the very, very distant horizon a peak of the white cliff you’re aiming for, it’s really hard to not keep looking at it!! With twitchy neck comes hurty shoulder (and a lot of finger wagging from the boat). For the next 45 mins, after a bit of a telling off, I kept my head down where it was supposed to be. What a lovely surprise it was when at the next feed I looked up to see that white cliff no longer on the horizon, but coming into clear view (even through the trusty, but scratched up, 3 year old goggles)! This is where I started to think we might actually do it. With the tide up our bums we were motoring! Twitchy neck however was getting increasingly twitchy... 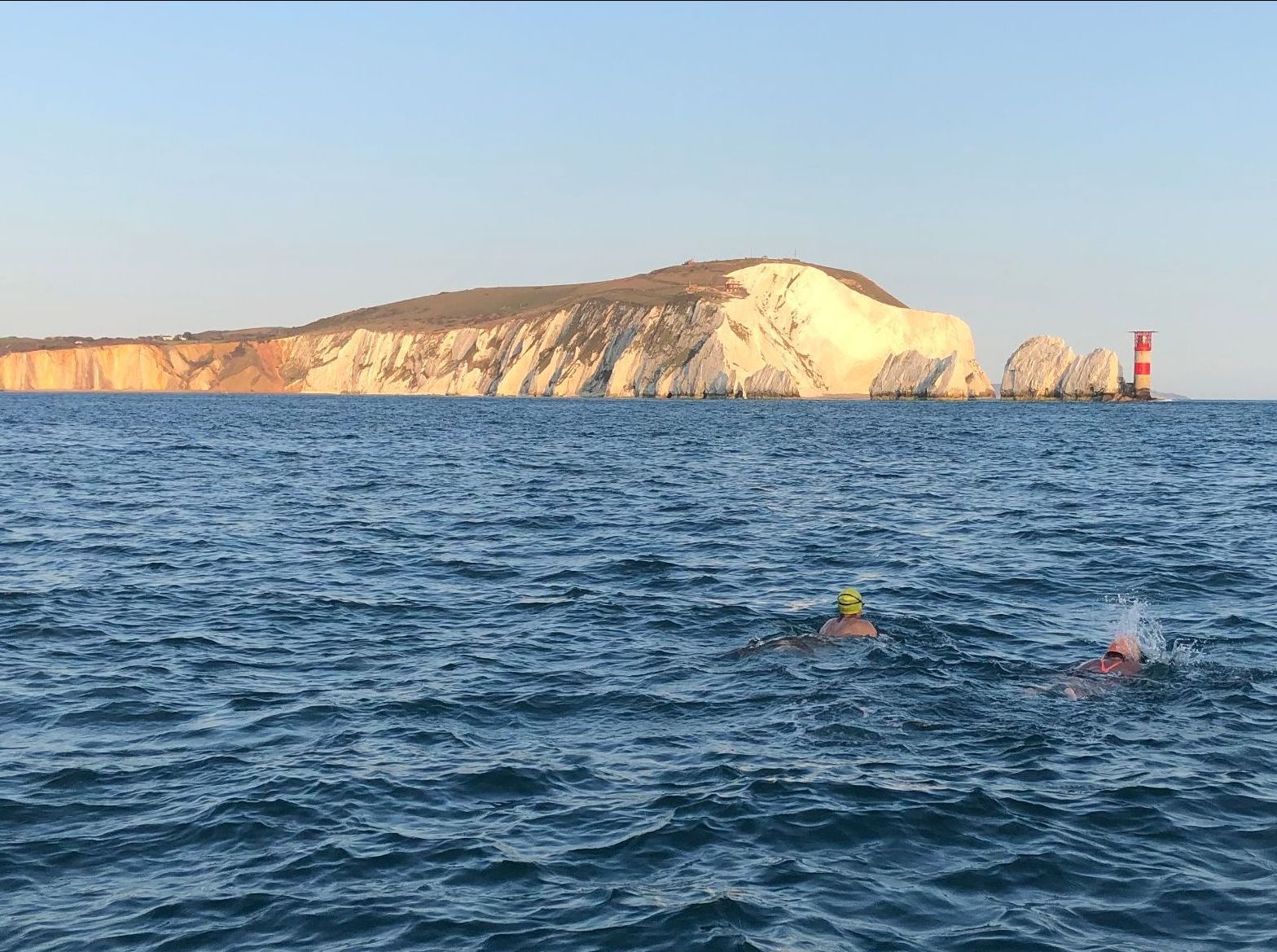 I’ve never been to the needles before, but I’d seen pictures of the lighthouse and it looked huge. Why wasn’t it getting huge yet? The needles were getting big, but I was sure we still had ages to go because the lighthouse just wasn’t getting any bigger!

For anyone who does this swim in the future and hasn’t been to The Needles before, it’s a disappointingly small lighthouse, but we made it!!!

9hr 54mins after leaving Old Harry we became the first people to swim the 16.4 miles to The Needles solo. It was an absolutely awesome, but tough swim that I hope will serve me well next July (fingers and toes firmly crossed).

I am now taking recommendations for the next interim challenge.  Keep them coming!

I am also plugging for sponsorship for my 2 very worthwhile charities: